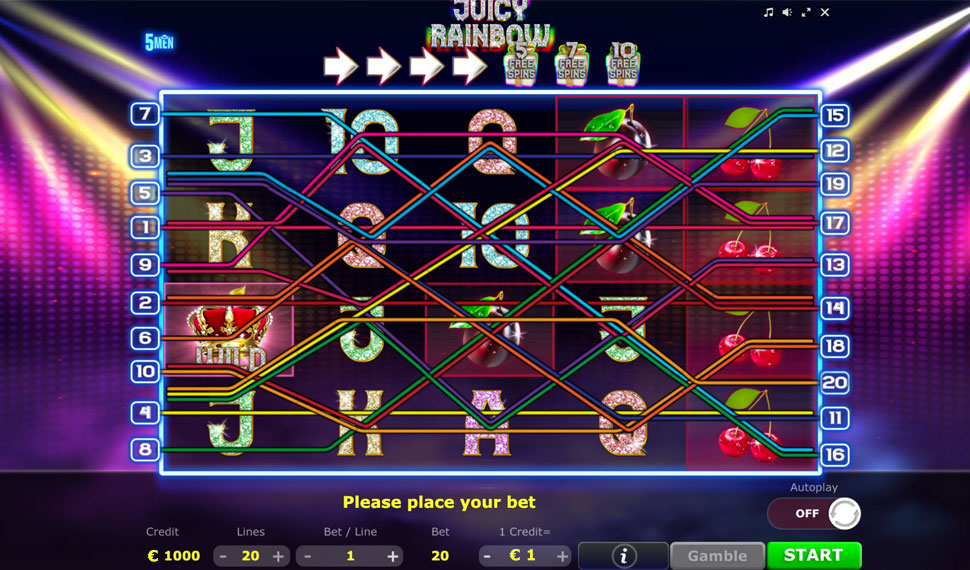 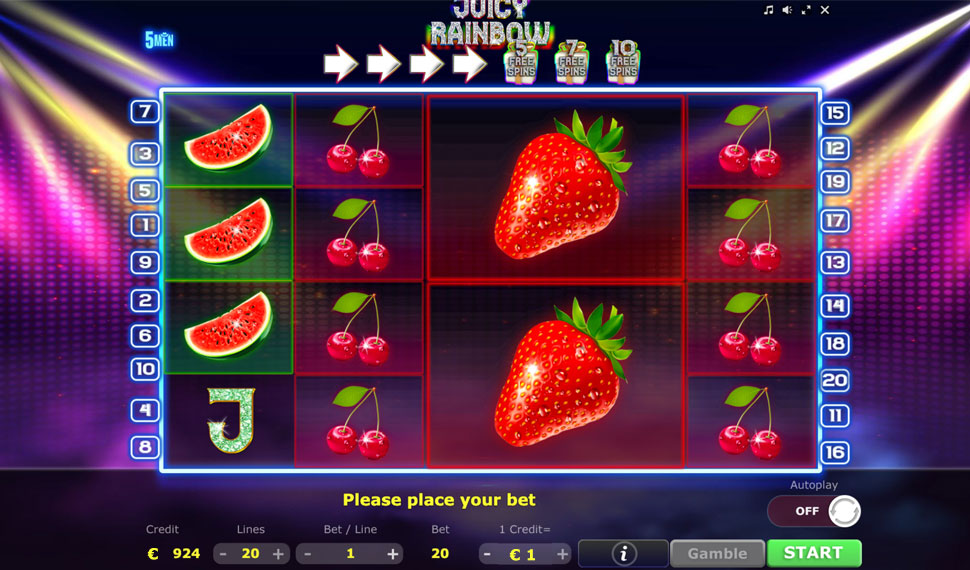 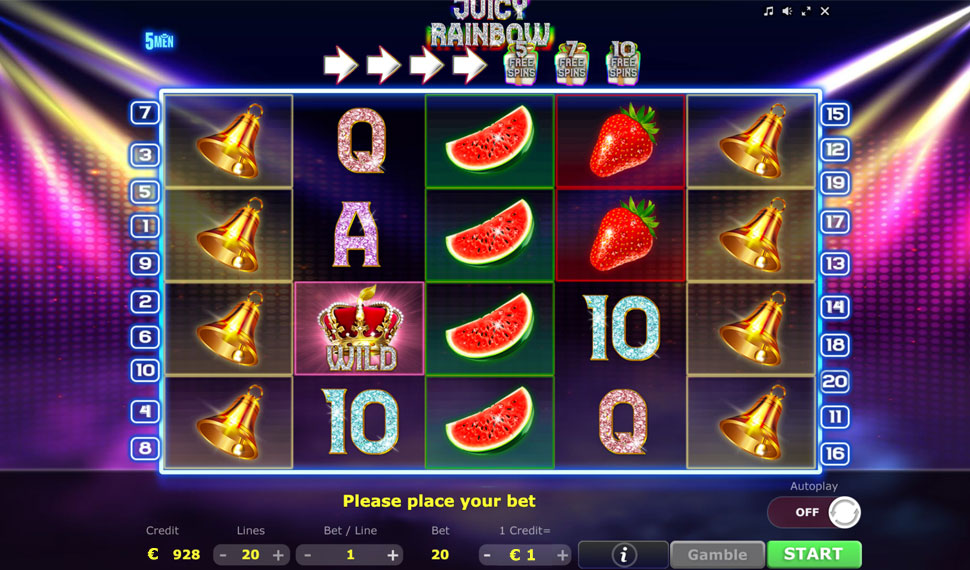 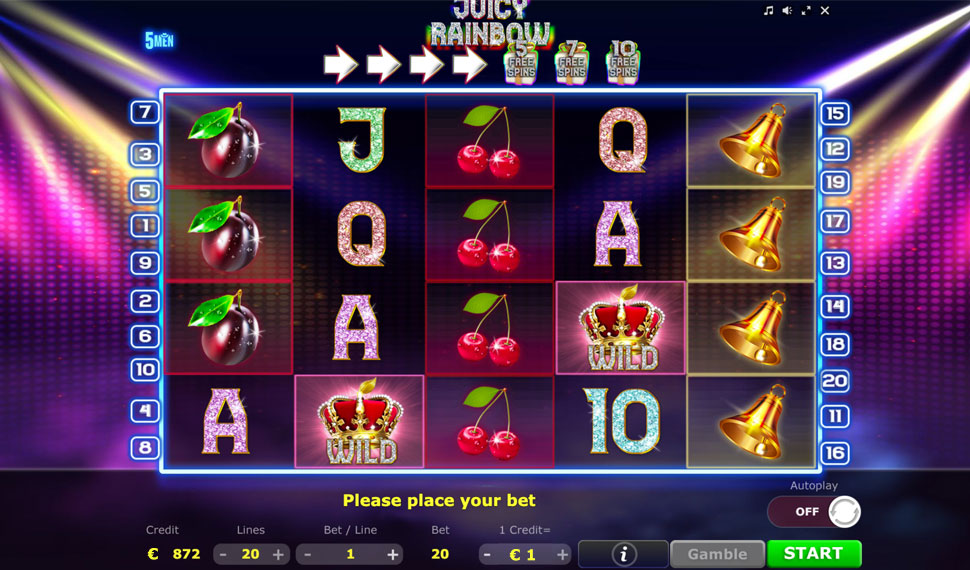 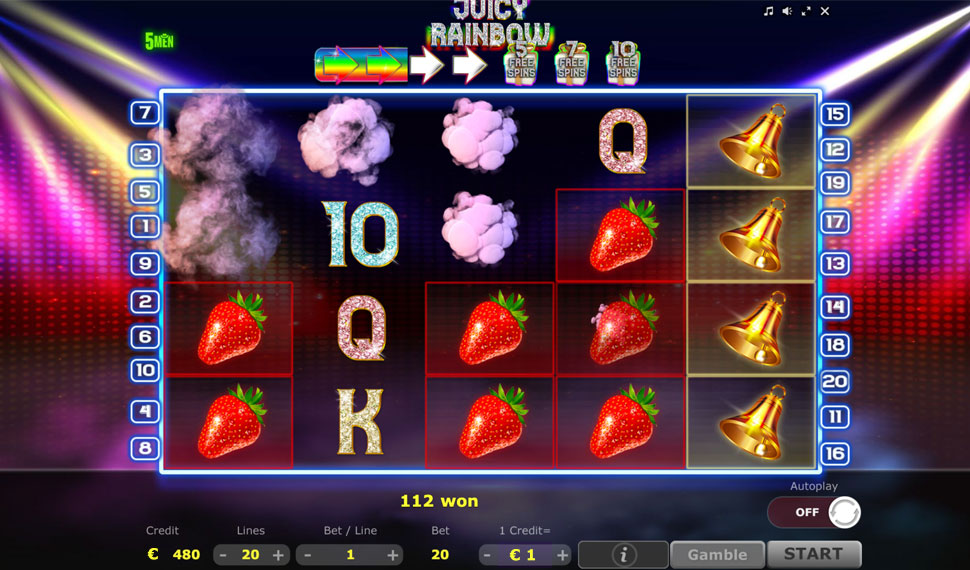 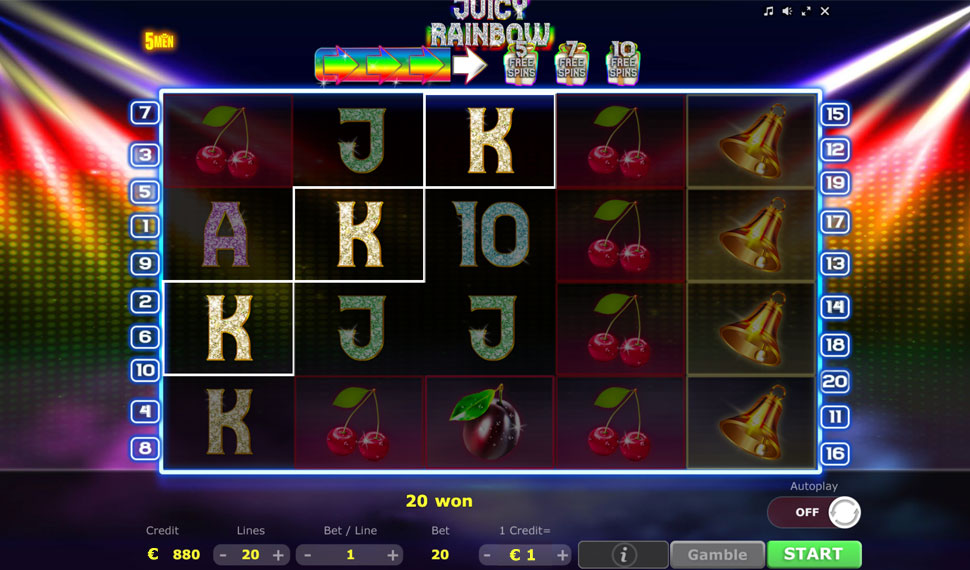 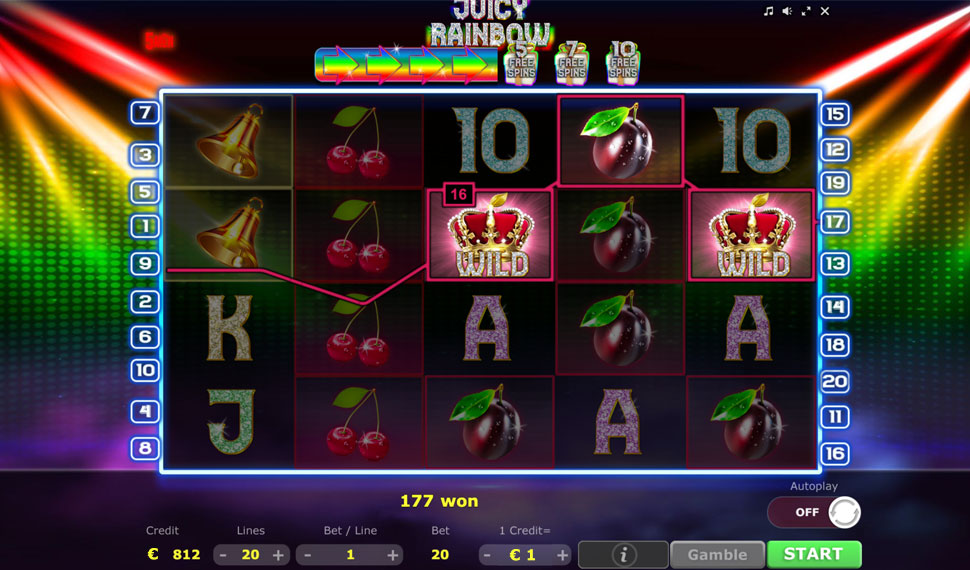 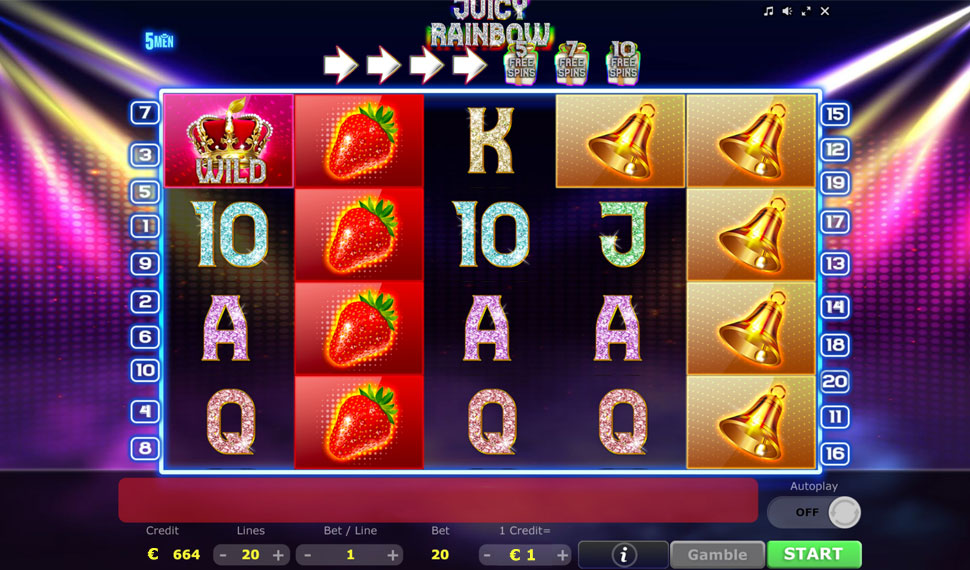 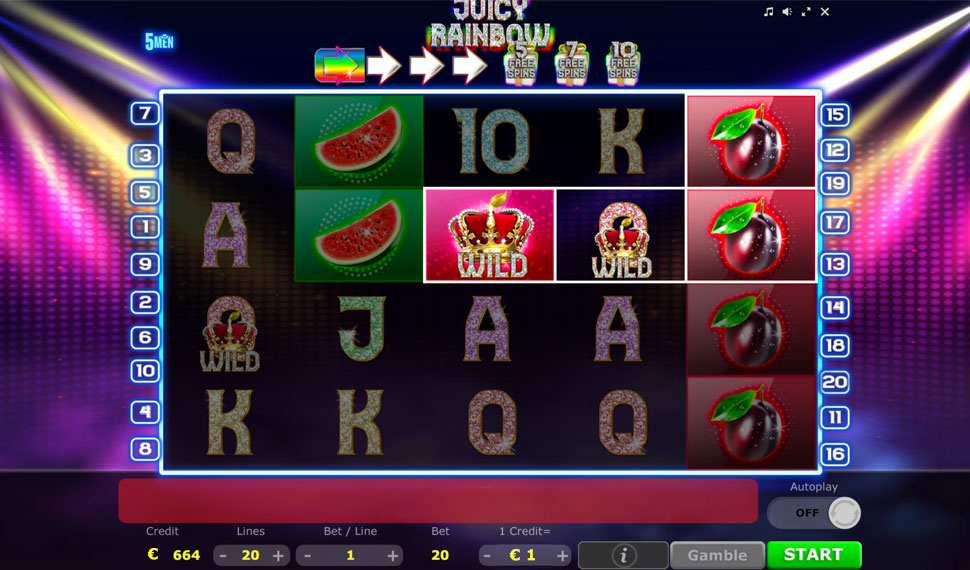 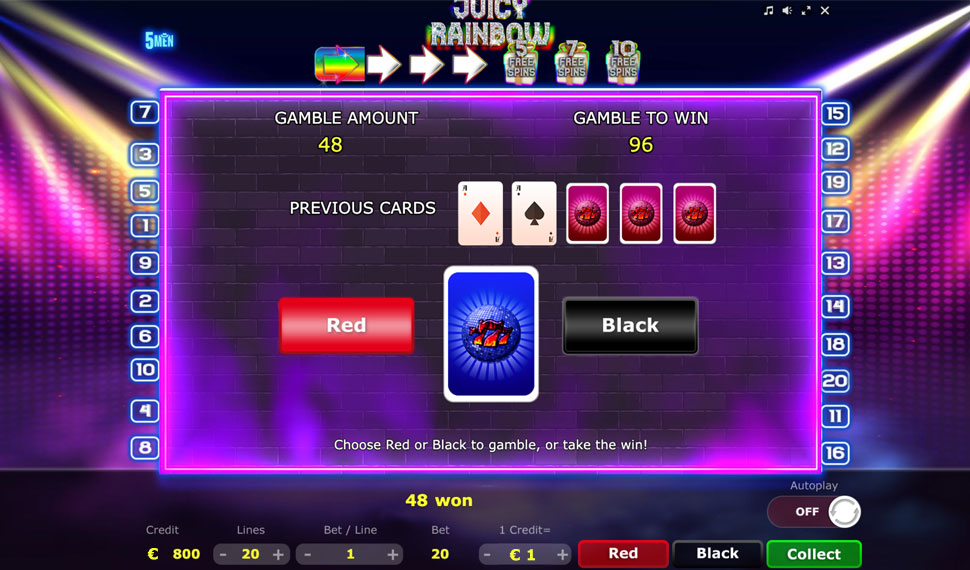 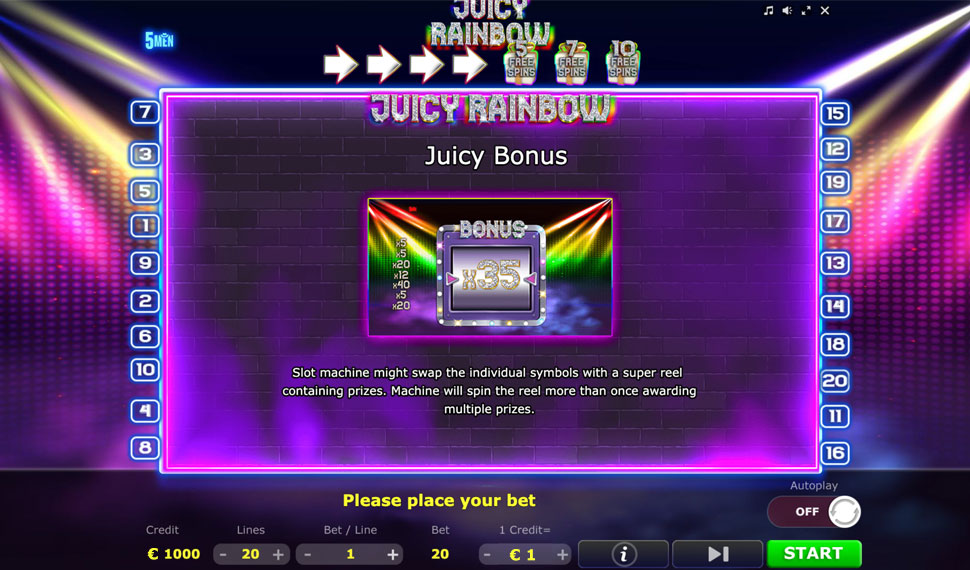 This lively title is exciting to look at with crowns, golden bells, juicy fruits and other classic symbols straight from Las Vegas. Everything sits on 5 reels with 20 paylines and the background of a stunning crazy disco floor.

The atmosphere is energetic and there are pleasant sound effects when you spin the reels or manage to strike a good win. The game features in this quirky slot machine include a freefall bonus feature, which gives tumbling reels instead of regular spinning reels. Other fun elements to this game include a cute bonus game and a free spins round.

The background in this game transports players to the 70s disco floor. The symbols on the reels are wonderfully classic, including the crown, a horseshoe and golden bell. There are also some high card icons which add extra ways to win and these icons pay out the lower rewards in the game.

The paylines in Juicy Rainbow are all fixed into place, giving you up to 20 win lines to play with on every spin of the reels. You can alter your stake per spin by clicking on the plus and minus boxes to alter your line bet from a minimum of 0.40 up to a maximum bet per line of 10000.00. The more money you bet on each spin, the better your potential payouts from 3 or more symbols. Other options for improving your experience include an autoplay button for hands-free spinning and a paytable button which displays all the symbols and their rewards.

The golden bell can swap the symbols with a bonus reel randomly which contains big prizes. This reel will spin multiple times to award extra cash prized with multipliers available including 35x your total bet. If you manage to trigger the free spins round the first arrow on the gift boxes trail will light up. Each time a spin improves on the previous win you will light up another arrow. When the freefall bonus is completed if you have moved far enough along the arrow trail you will win the number of free spins highlighted on the gift box, which will give up to 10 free spins.

Juicy Rainbow has a strongly classical theme and players who enjoy this style will love all the symbols such as the horseshoe and the golden bell! The freefall feature means extra winning chances on every spin and many players will know this as the tumbling reels feature. Free spins occur frequently here to award more winning chances while the Bonus Reel also boosts the overall money up for grabs from this slot by awarding big multipliers.