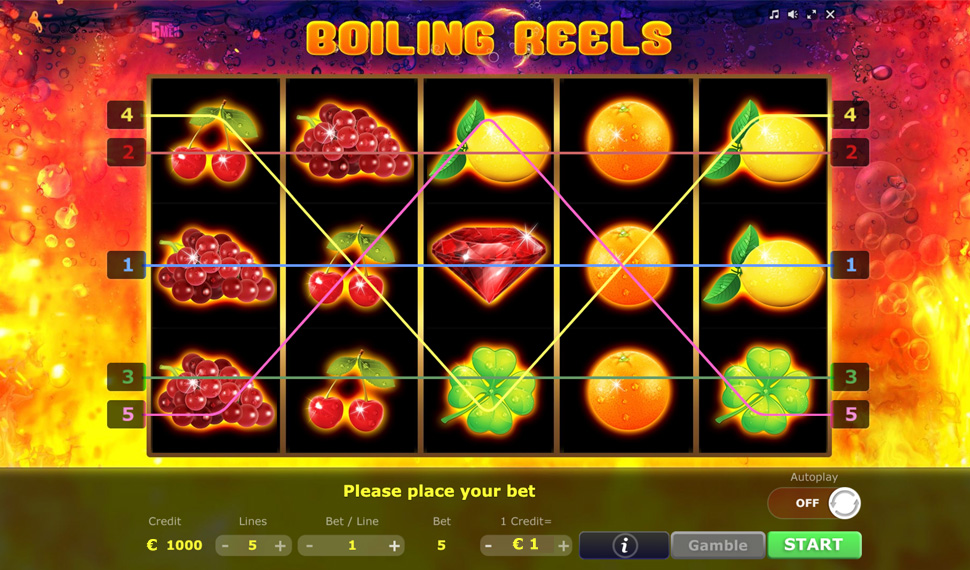 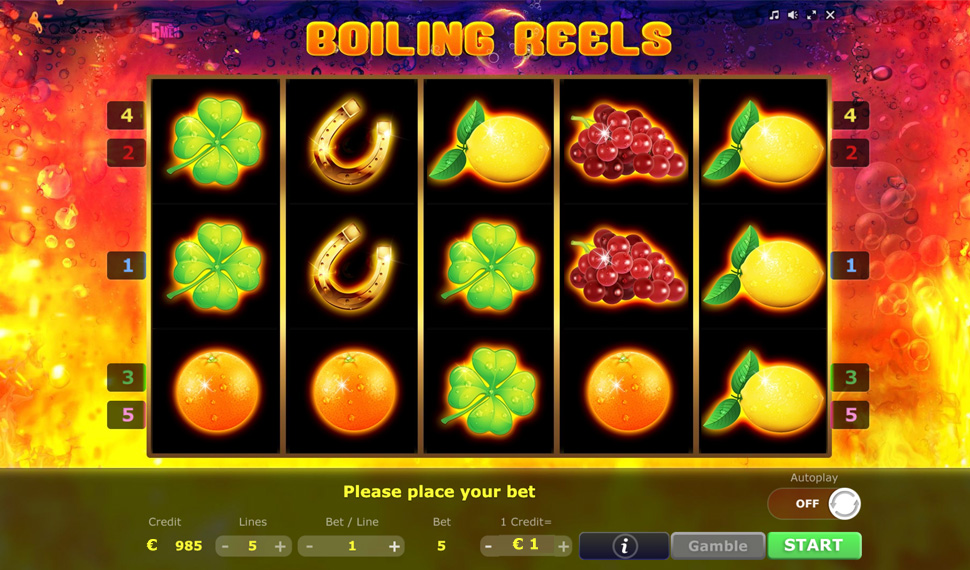 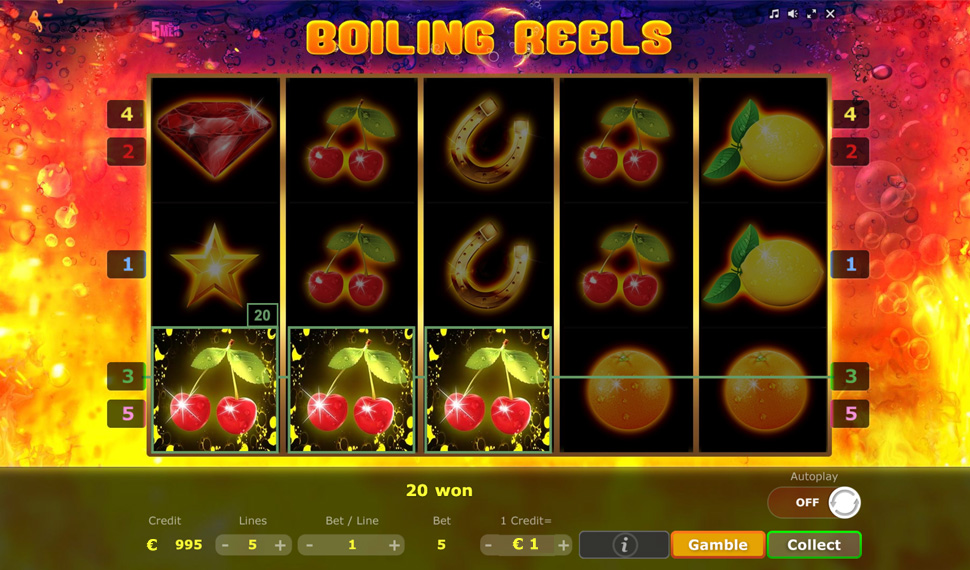 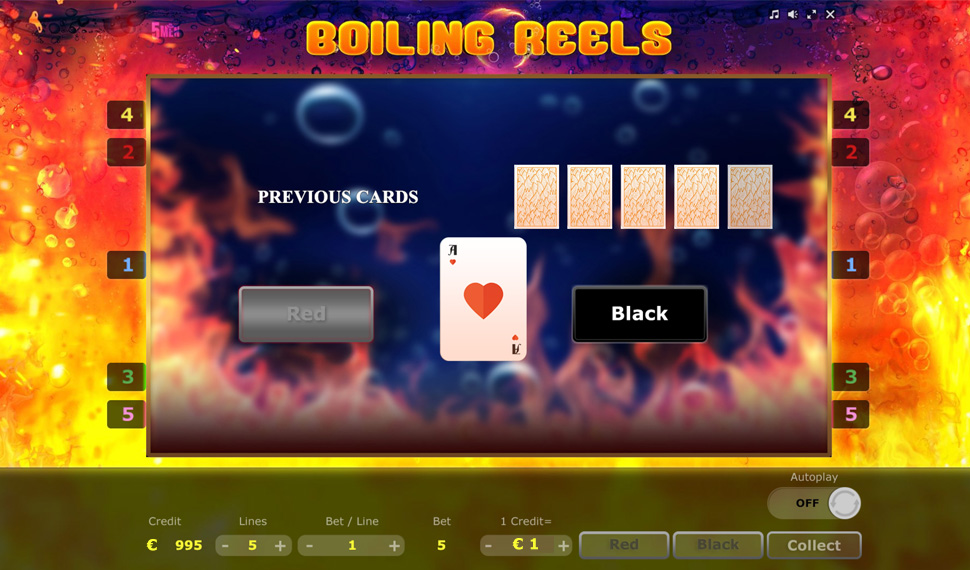 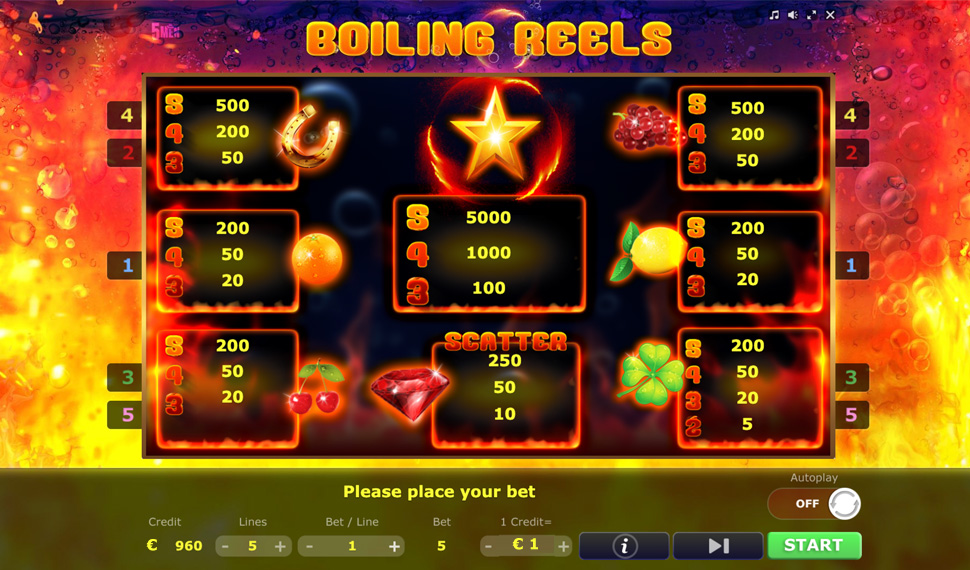 Boiling Reels is played on five reels, three rows, and five pay-lines. These pay-lines are fixed, and since they are only five, you have fewer winning combinations to make. Everything about the slot is simple, including the gameplay. Form a winning combination of matching symbols from the leftmost reel on a pay-line. All combinations are paid from left to right, and all wins must land on any of the five pay-lines, except for the scatter.

The first thing you need to do is select your bet per line, which will automatically change your total bet. Your total bet is your line bet multiplied by the five pay-lines. Also, you can pick how many credits you want to play with. After setting up your bet, press the Start button for the reels to spin.

You can select the autoplay option, and it will automatically spin the reels for as long as you want. When you want to stop, click on the Stop button.

All the symbols on the Boiling Reels slot are either fruits, lucky horseshoe, ruby, or a star. The scatter symbol is the ruby, and it offers 250x, 50x, and 10x your bet per line for landing five, four, and three across the reels.

Other symbols include the orange, lemon, and cherry symbols, which offer the same payouts. You get 200x your bet per pay-line for landing five of a kind across the reels. You also get 50x and 20x your bet per line for four and three on the reels.

Lastly, we have the clover, which is the only symbol that also pays for two on the reels. If you land five, four, three, or two cherry symbols, you get 200x, 50x, 20x, and 5x your bet per line.

The only thing close to a Boiling Reels bonus feature is the scatter symbol. This is represented by the ruby and can reward you with impressive wins. The scatter does not unlock any bonus features or offer any special jackpot prizes. Instead, it just provides you payouts. Apart from this, there’s nothing noteworthy about it.

The scatter gives you with 250x your bet per line when you land five on a pay-line. It also gets special treatment from the other symbols on the reels. For one, the winning combinations are from left to right and at any position on the reels.

There is also a gamble feature that kicks in after every win. Once you land a winning combination, you can click on the Gamble option. Then, you will have to guess if the color of a card is black or red. If you guess right, you get double your win. You can play the gamble game up to five times, and it ends when you collect your prize, when you lose or when you finish playing it.

There are no Boiling Reels free spins and bonus rounds to look out for. But, if you like simplicity in your slots, you will still enjoy playing this one.