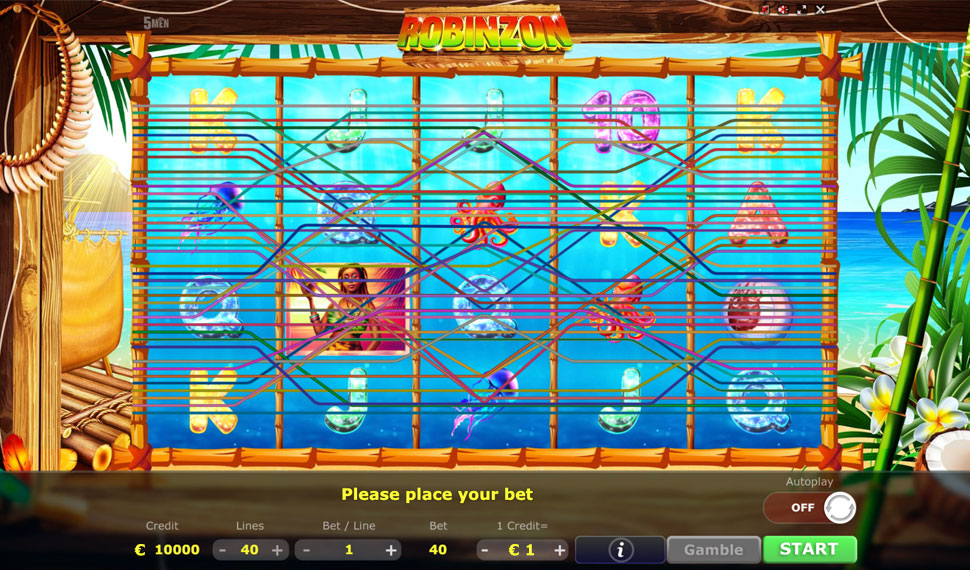 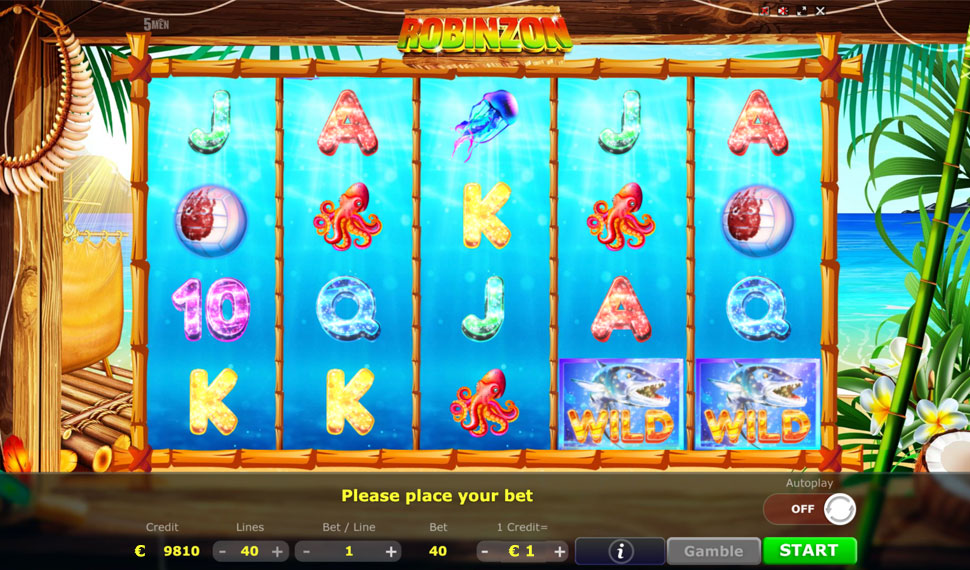 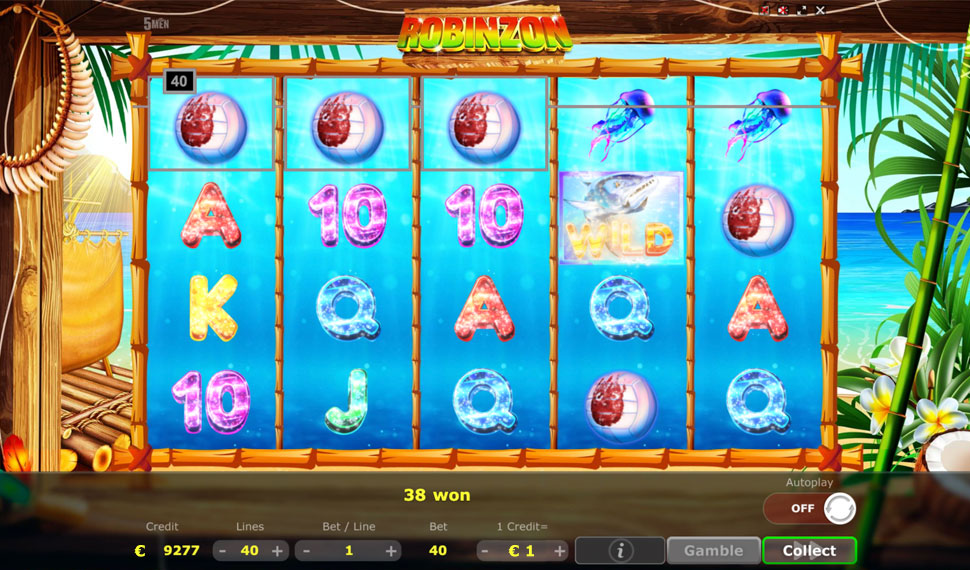 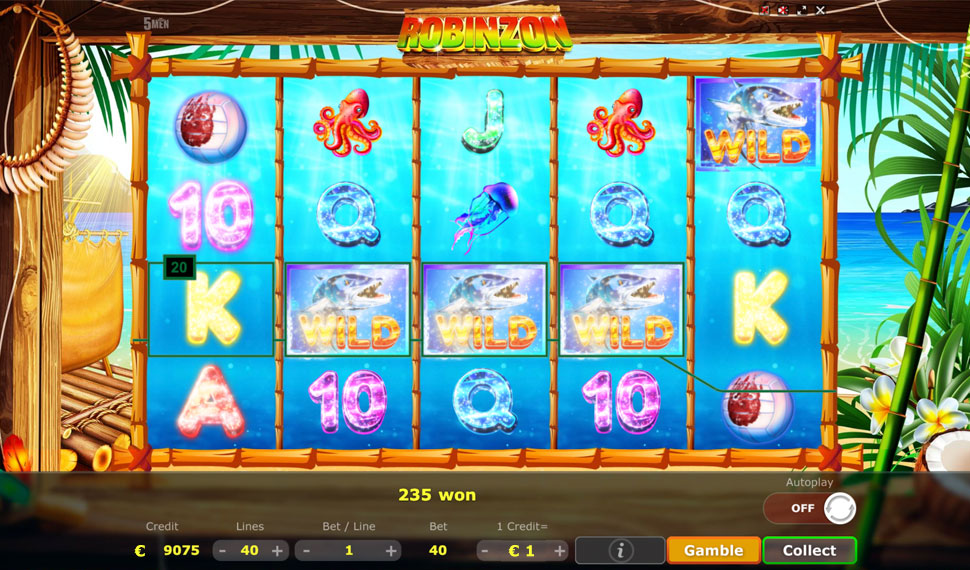 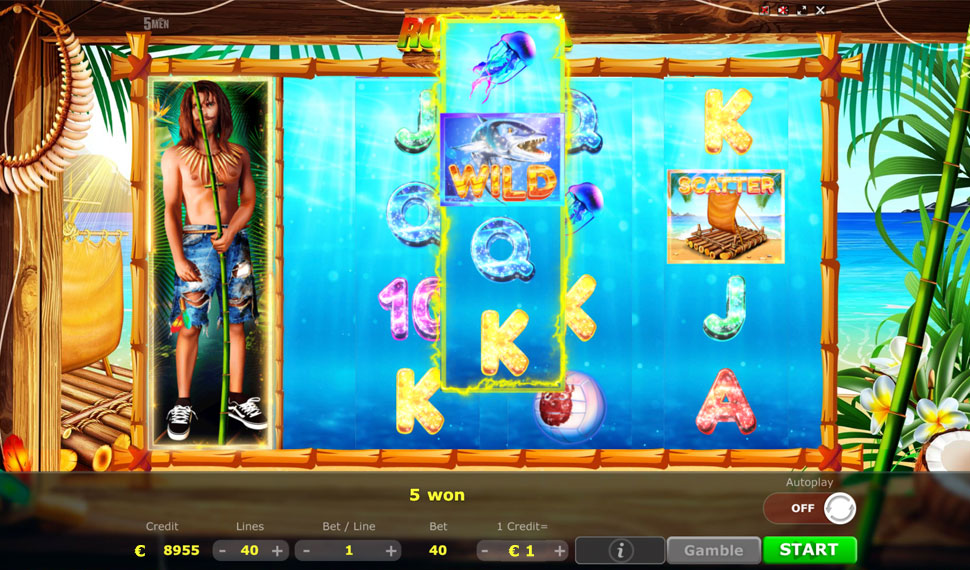 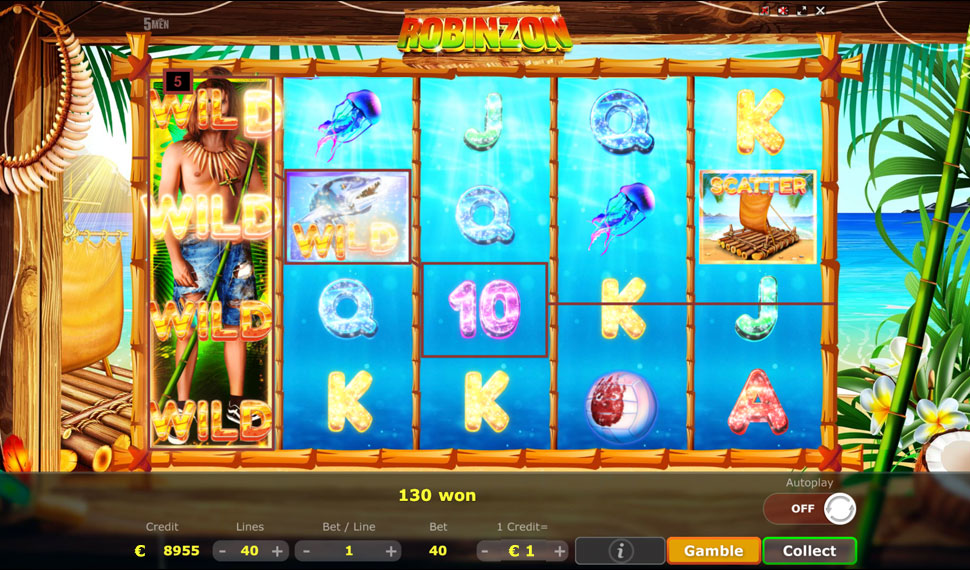 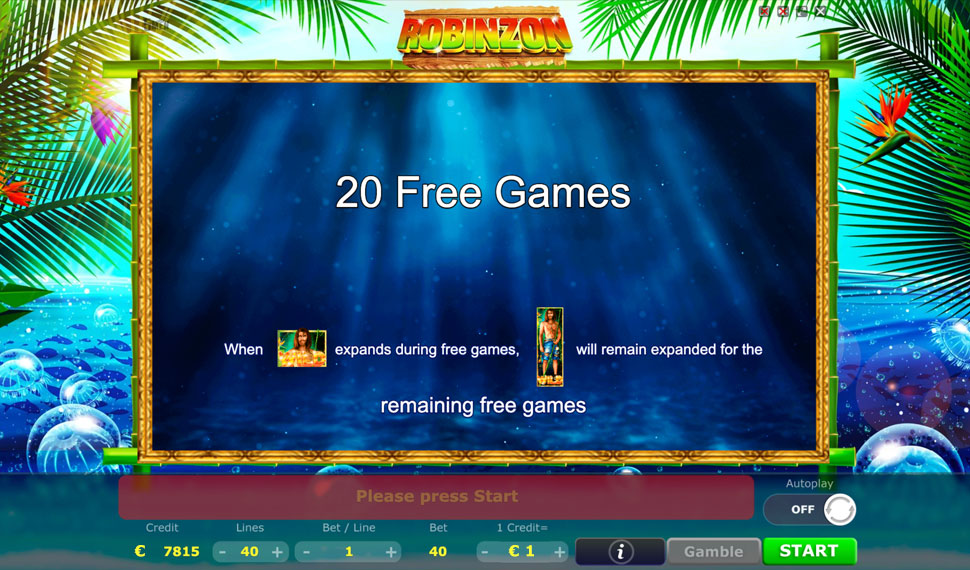 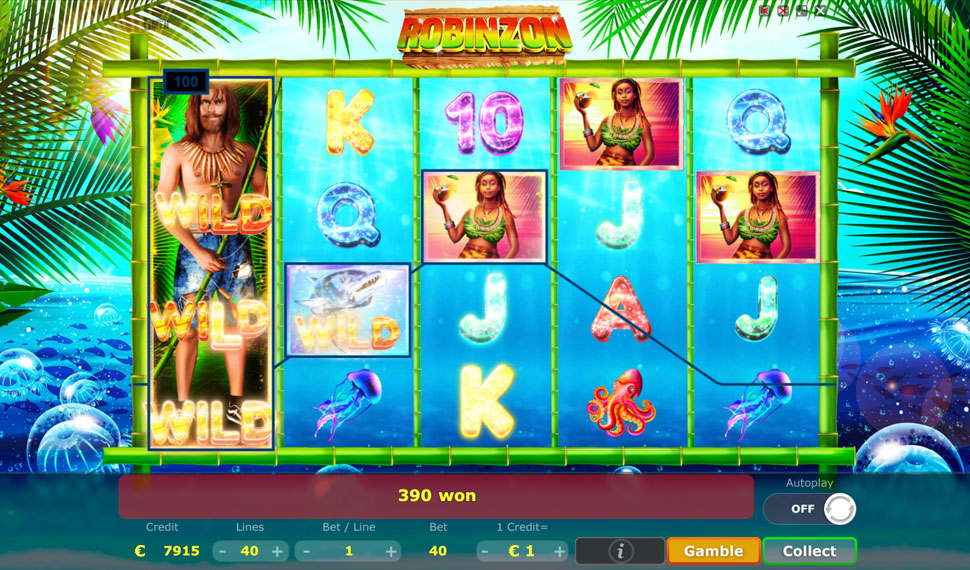 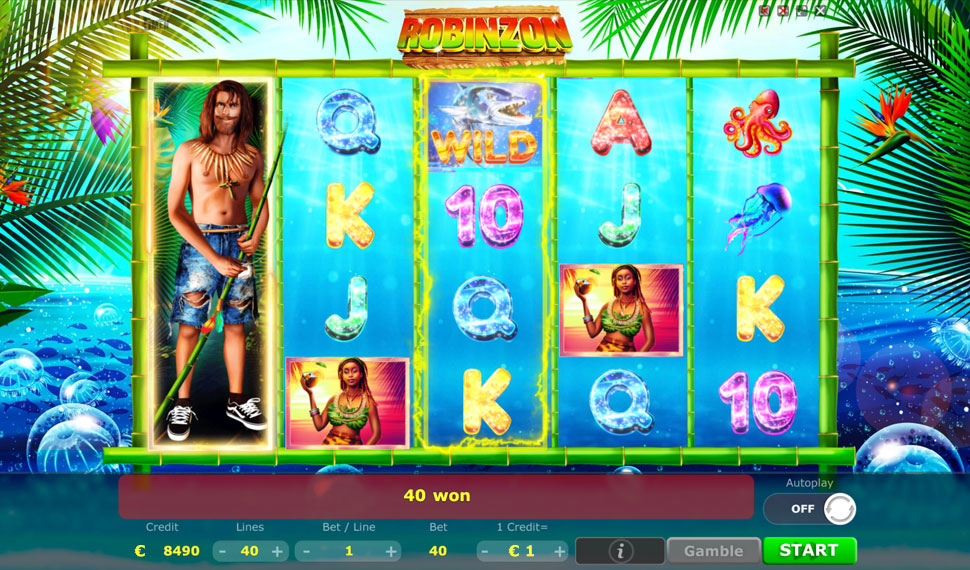 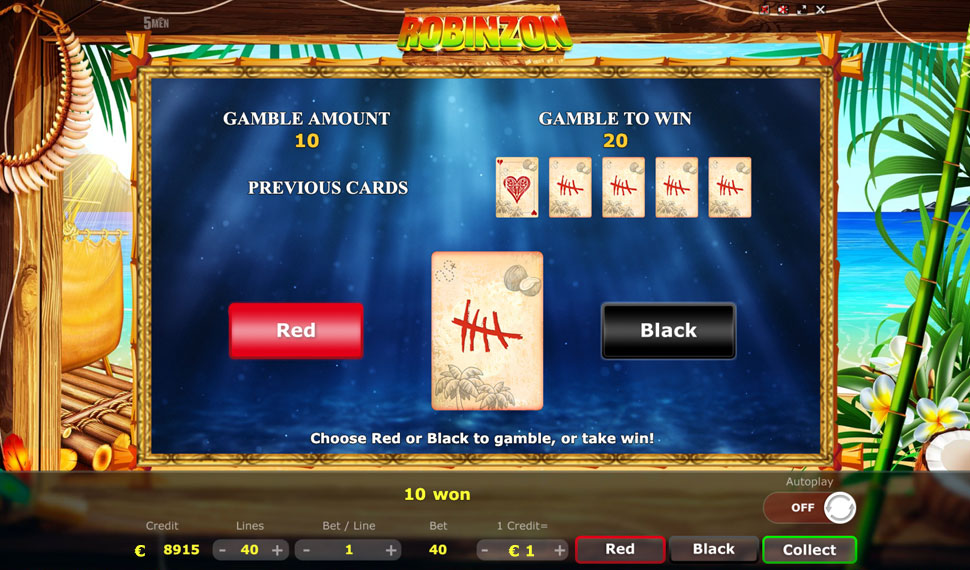 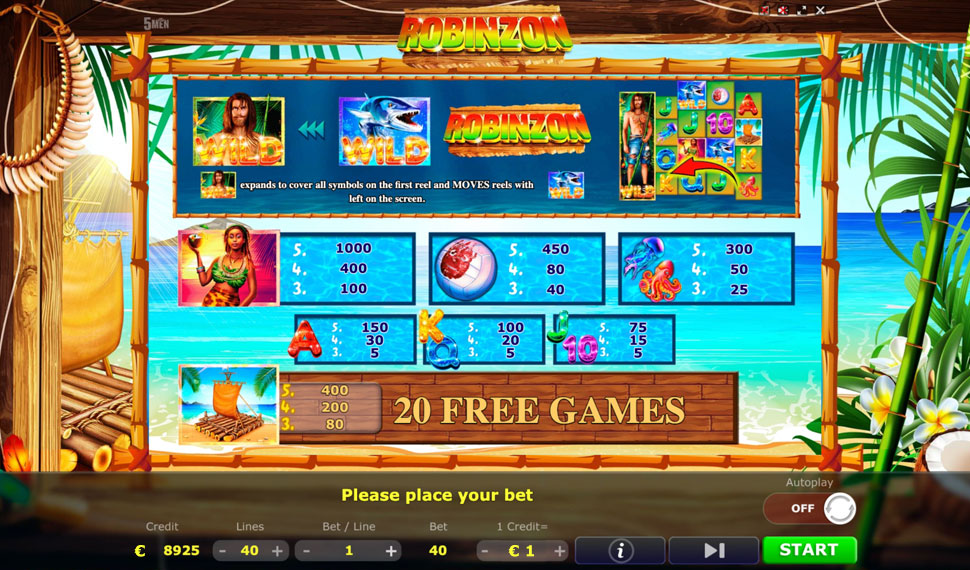 Take a break from the hustle and bustle and catch some really BIG FISH on an island paradise full of juicy fruits, enchanting beauties and hidden treasures!

Robinzon is powered by 5Men and comes with 5 reels and 40 paylines. Playable from 0.4 to €100 per spin on desktop, mobile and tablet devices, this angling themed slot benefits from a Reel Catch feature where you get an expanding wild with all fish wilds pulled to the left. There’s also a Free Games feature where you can get up to 40 free spins with a fixed wild reel.

Robinzon has playing cards (A, K, Q, J and 10) as well as Wilson ball, octopus and jellyfish as well as a bikini clad Friday – she is the most lucrative symbol giving you 25 times your stake for 5 across a payline.

You will also benefit from Robinzon and fish symbols which are both wild – they form the bases for the Reel Catch feature. This is triggered when the Robinzon wild lands on reel 1 and 1 or more fish wilds land on any of the other reels. The Robinzon wild then expands to take over reel 1 (giving you a wild reel) – he then reels in the fish wild to the left-most reel (reel 2) to give you a guaranteed win.

This gets better in the Free Games feature which is played when you get 3 or more raft scatters anywhere on the reels – this will reward you with 20 free spins. Now, when the Robinzon wild expands on reel 1 during the feature, it will remain held for the duration of the feature meaning you’ll have a wild reel for all free spins.

If any fish wilds land on the other reels during a free spin, they will move left to give you guaranteed wins. Finally, you can retrigger the feature once by getting 3 or more scatters giving you 40 free spins in total.

You will definitely like Robinzon as it’s fun and quirky – the Reel Catch feature has the potential to pay out big in both the base game and Free Games feature but your potential is bigger in the latter due to the Robinzon wild reel being fixed for the duration of the feature.